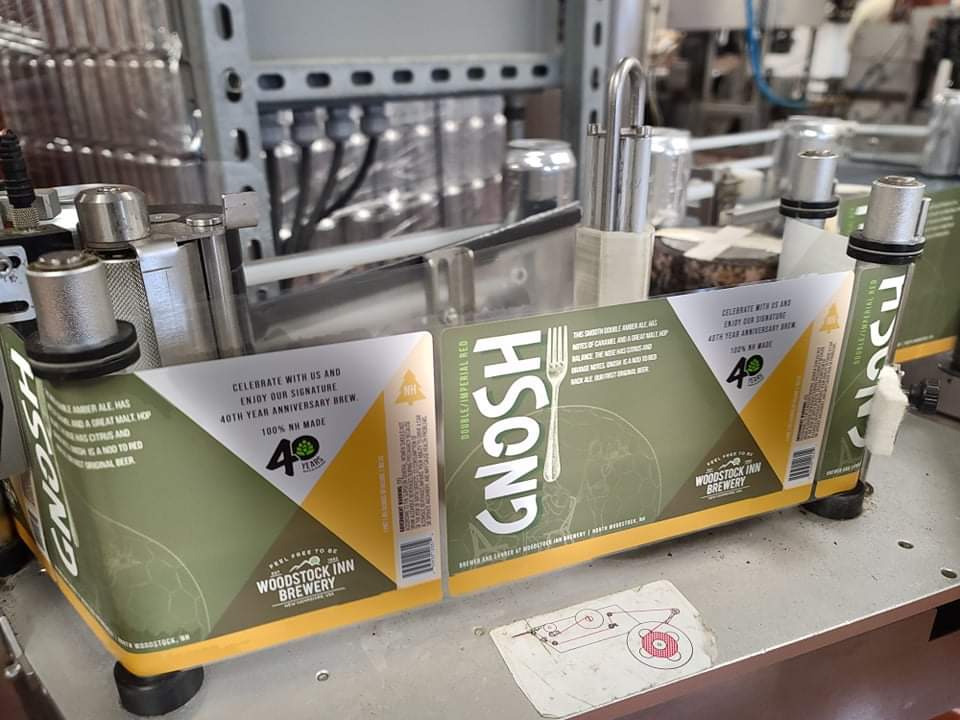 2022 is our 40th year in business and we’re releasing five special anniversary beers! First up is Gnosh, a double red ale. Look for it in stores this month in 16 ounce, four-pack cans. Gnosh has notes of caramel with a great hop balance and orange and citrus notes in the nose. This beer is a nod to one of our OG (original) beers, Red Rack Ale.

IT’S LIMITED! We only made one batch, so buy it now before it’s gone.

Why are you calling it Gnosh and how the heck do you pronounce it?

The “G” is silent. Gnosh, also spelled Nosh, means to munch. Many people know us for great beer but we’re also widely known for delicious New Hampshire eats. Breakfast, lunch and dinner. We decided it would be pretty cool (and meta!) for our award winning restaurant to have its own beer. 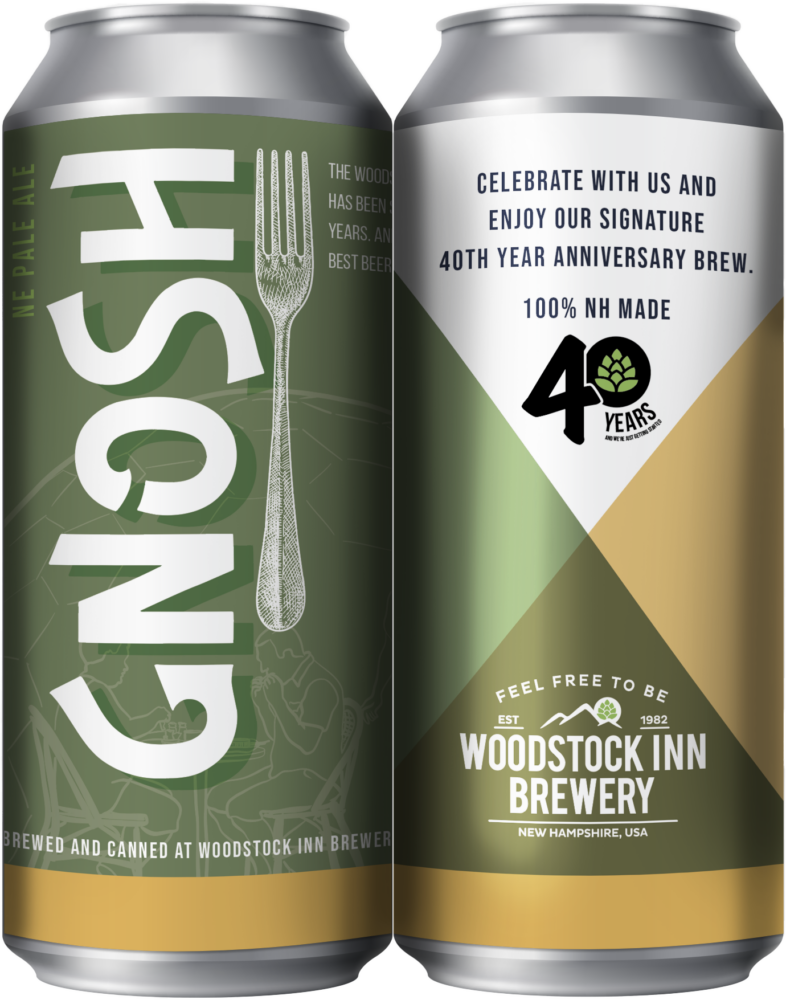 Some background on our Anniversary beer releases…

We’re releasing a total of five beers and each one honors a different part of our business and history. Gnosh is the food beer. Next up will be Hoppily Ever After, in honor of all the terrific weddings we’ve hosted. Then, Get a Room will be our “Inn beer.” Brew number four is Destination because that’s what North Woodstock, NH is! The fifth beer is dedicated to our customers and its attributes and style will be chosen by YOU! More on this coming soon.

Woodstock Inn Brewery was founded by Scott Rice. Yankee Brew News did a great job with an overview on our history:

During the summer months in the early 1980s, Scott Rice managed the Jack O’Lantern resort in North Woodstock, N.H., and taught skiing in Colorado in the winter while the resort was closed. If it wasn’t for the fact that it was more expensive to live in Colorado than it was in N.H., he could have stayed in Colorado year-round.

At the end of 1982 when Rice was almost 30, he realized it was about time to settle down into a more permanent home and business. Having only a dream and couple thousand dollars to his name, he managed to purchase an old house at 135 Main St. in North Woodstock for $35,000 on Christmas Day in 1982. That house would become the first building of what is now the Woodstock Inn [Station and] Brewery. It was a small start that would in short time expand and take on a life of its own.

We asked Scott some follow-up questions for this Gnosh blog, but he told us to “go away” as he ran back into the kitchen to work during the recent Massachusetts school vacation break. 🤣 Molly was with him so we called his son Keegan, now a real estate agent in the area, and he knew most of the answers.

Scott has a degree in hospitality management. He spent summers wearing all kinds of hats working at the Jack O’ Lantern and that’s where he developed his kitchen skills. Scott wrote the majority of the recipes for the menu items that are popular today. The meatloaf, for example, is unique and came from Scott “throwing stuff in a buffalo chopper.” If you’ve ordered it, you know why it’s no surprise that it’s his favorite dish on the menu.

Any menu fails? Keegan, who spent a lot of time working with his dad in the kitchen, joked, “for customers or cooks?” Then added, “the frog legs. People seemed to eat them just to say they tried them but they weren’t widely popular, like the Loon Dip.”

We asked Keegan about the Wizzard of Oz theme for the breakfast menu. That stumped him. BUT when asked about the origin of the Womlette he said his dad “brought the womlette up to New England.” And the only other elusive detail he added, “from a personal trip turned business.”

Some info from the brewery…

Our assistant brewer, Saša Marinkovic wrote the recipe for Gnosh and said, “I’ve worked for the Woodstock Inn Brewery for four years. It’s an honor to write this recipe for one of our 40th Anniversary brews. A lot of guests have been coming to visit us since we started brewing beer down in the seven barrel brew pub. Many say Red Rack was one of the first craft beers they tried as the craft beer revolution started. I think they’ll really enjoy drinking Gnosh.”

He added, “I didn’t follow the original Red Rack recipe to a tee, but Gnosh has a similar malt base. The hops are a bit different in order to make it more aromatic. Gnosh, double red ale is unfiltered.”

You can find Gnosh, double red ale in stores throughout New England until it’s gone. Can’t find it? We can help.

Yes!!! Lots!!! We regularly publish two types of recipes on our blog. In-house recipes like the Spent Grain Beer Bread and another type that we created for people to make using our beer, like Double Pig’s Ear Slow Roasted Short Ribs.

One last thing about the Womlette…

You might say it’s kismet. As we were finalizing this blog we got a video from Max in Denver who visited three or four years ago and had his first womlette. He’s making his own version at home and we are touched… and very impressed! “Max! We need line cooks! When can you get here?!” 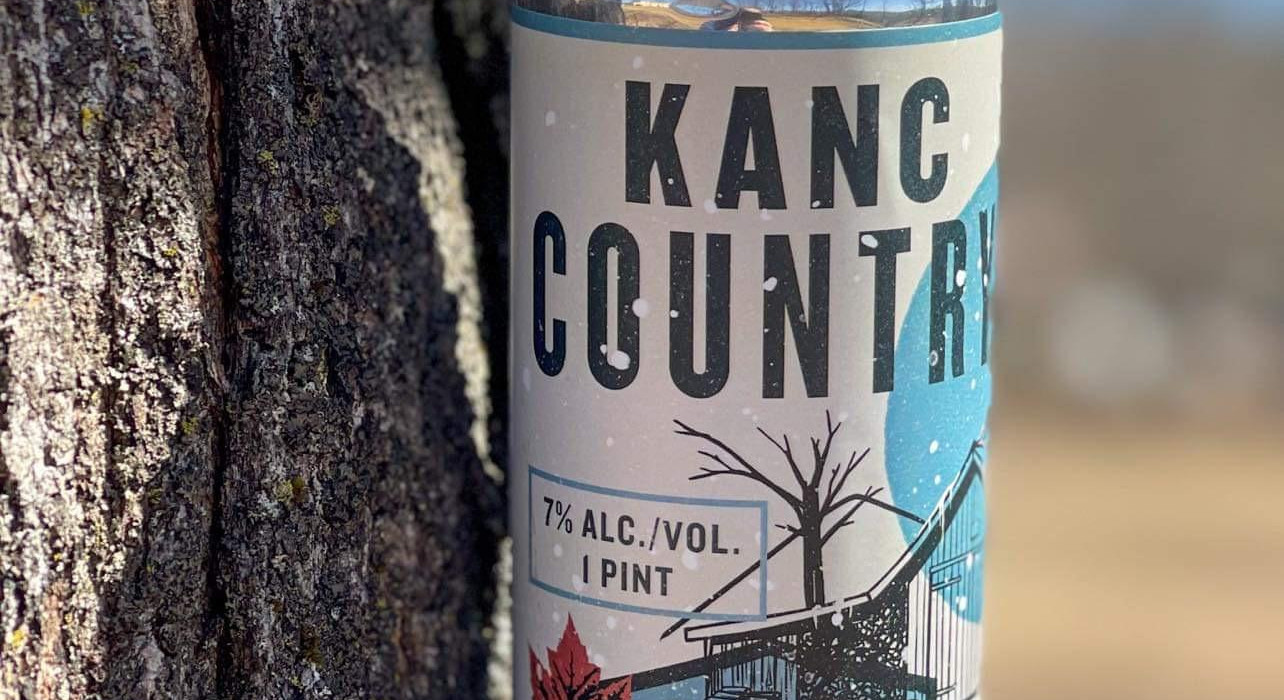